"Before you say you can’t do something, try it."

Sakichi Toyoda (1867 – 1930) is known as the father of the Japanese industrial revolution, and is the founder of Toyota Industries. He was, before everything, a great Japanese inventor and industrialist.

His father was a poor carpenter, his mother a weaver, and he combined their skills by inventing numerous wooden devices to automate weaving and devices for reeling and winding yarn.

Through his inventions, he really revolutionized the textiles industry in Japan.

His biggest invention was the Toyoda wooden hand loom in 1981, but he focused on improving the loom systems for many years. The concept of jidoka originates when he invented a textile loom that stopped automatically when any thread broke. Previously, if a thread broke the loom would churn out mounds of defective fabric, so each machine needed to be watched by an operator. Toyoda’s innovation let one operator control many machines.

Toyoda also developed the concept of 5 Whys: When a problem occurs, ask "why" five times to try to find the source of the problem, then put into place something to prevent the problem from recurring. It is now a critical component of problem-solving training, delivered as part of the induction into the Toyota Production System.

The 5 Whys method is viewed as "the basis of Toyota's scientific approach . . . by repeating why five times, the nature of the problem as well as its solution becomes clear." Nowadays, the technique has reached other companies and organizations far beyond Toyota, and is now used within Kaizen, lean manufacturing, and Six Sigma.

Canvas from this creator 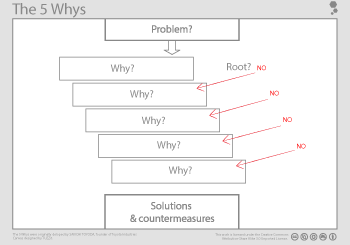